The History of Blairman's from 1884 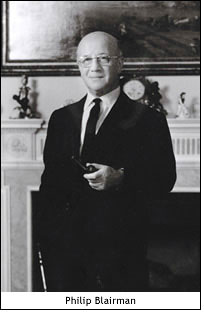 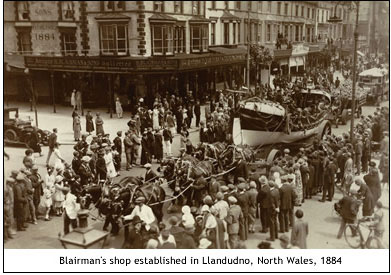 (Jacob) Harris Blairmann (c.1865-1926) was born in Poland and came to England, perhaps in the late 1870s. Little is known of his early life, but when he first arrived he is believed to have worked for an antique dealer in Birmingham; shortly thereafter he set up on his own account, in partnership with a man named Gesundheit; this connection appears to have lasted until at least 1905.  Blairman’s naturalisation papers from 1901 describe him as an ‘auctioneer and art dealer’, living in Liverpool.

The firm of Blairman (with Gesundheit) was established in 1884, in Llandudno, on the North Wales coast. In those earliest days Harris Blairman (the second ‘n’ was dropped around the time of World War I) dealt in contemporary, as well as old, decorative objects. He imported modern Dresden china, Noritake tea and coffee services, and sold ‘Grosvenor China’ supplied by Jackson & Gosling; there were  also nineteenth-century Japanese ivories and other Asian items, famously popularised by Liberty’s in London.

In addition to being a retailer, Harris Blairman, Martin Levy’s great grandfather, held auctions during the summer season, from premises at the end of the pier. The Llandudno shop is shown above with a parade passing the corner of Mostyn Street and St George’s Place.

Harris was joined by two of his six children, Philip and David. It is to Philip, shown here in his house in Cadogan Square towards the end of his life, that Blairman’s owes its development. At some point, probably the late 20s, having somewhat recovered from the traumas of active service in the Royal Flying Corp, Philip Blairman began to concentrate exclusively on what today would, in the main, pass as ‘genuine antique furniture and works of art’. By this stage not only had Philip set up premises in the northern spa town of Harrogate, but he had also established a showroom in London. ‘Blairman of Llandudno’ regularly held exhibitions of ‘works of art’ around the country during the 1930s, highlighting, for example, ‘ivory carvings, pictures, gold lacquer and old china’

Among Philip Blairman’s greatest characteristics (apart from his love of fast cars) were his foresight and innovatory spirit. During the early decades of the twentieth century, considered wisdom had it that proper antique furniture more or less ceased to exist from any period after about 1800. But then individuals such as the playwright Edward Knoblock, and the architects Gerald Wellesley and Albert Richardson began to take seriously objects from the Regency period. They had all, for example, made purchases of furniture designed by the early nineteenth-century connoisseur and collector Thomas Hope, from the Deepdene sale. Philip Blairman must, in some way, have picked up on this trend, and became perhaps the first dealer to make a speciality of this area. In fact the firm, at the time still run by Harris, was a buyer at the Hope Heirloom sales held in 1917 at Christie’s, but not any ‘Regency’ items.

In 1949 Martin Levy’s father George decided to give up his burgeoning career as a cameraman with Ealing Studios. He joined Philip Blairman, a family friend, and from 1951 his father-in-law. Martin joined his father and mother (Philip’s daughter Wendy) in the mid-70s, and they enjoyed more than twenty years working together until George’s untimely death in 1996; Wendy died in 2006.

Blairman’s, which celebrated its 135th anniversary in 2019, is currently run by Patricia and Martin Levy.