A Regency gallery in Boston 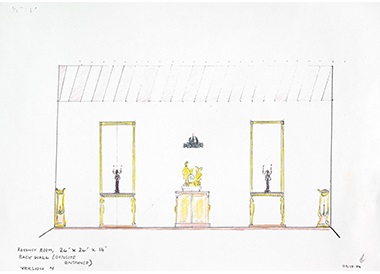 In September 2013 the Museum of Fine Arts, Boston opened a new gallery devoted to furniture and works of art from the Regency period. This richly upholstered room, with a tented ceiling, evokes the spirit of Regency interiors, as portrayed in plates published by George Smith and Rudolph Ackermann.

Horace ‘Woody’ Brock dreamed up this room and it was the late Tracey Albainy who, in 2004, presented the original concept to the museum (see right). The MFA took on the meticulous construction of the Regency Gallery, which now houses Brock’s generous gift of works from the pantheon of Regency-period patrons, designers and manufacturers, including Rundell, Bridge and Rundell, Benjamin and Lewis Vulliamy, George Bullock and William Bullock, and Thomas Hope. Also represented, through objects formerly in their possession, are some of the outstanding early admirers of Regency material: Sir Albert Richardson, Sir Gerald Wellesley and Temple Williams.

The ‘marmalade orange and golden yellow’ gallery at the MFA has been brought to life through the efforts of Malcolm Rogers, together with Thomas Michie, Rebecca Tilles and many unsung heroes at the museum, who have rendered each element of the installation with painstaking attention to detail.