Furniture and Works of Art 2014: some new information about J.E. Knox

Most years, following the publication of Furniture and Works of Art, we receive valuable additional information about one or more of the objects included.  Such responses tend to get tucked away for future use.  But now, with our new website, the opportunity exists to draw attention to these welcome contributions. 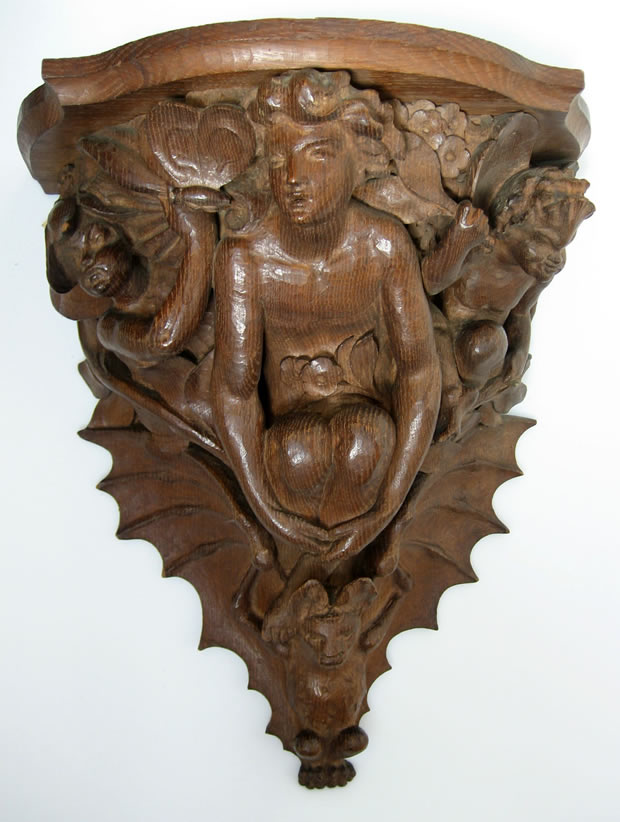 This year we published a bracket by ‘J.E. Knox’, dated 1912 (see above).  Other than noting a smaller carving belonging to the V&A, we commented that ‘nothing more, at present, is known of Knox, who was evidently a skilled sculptor.’  Now, thanks to the kind intervention of Max Donnelly and Sarah Medlam, more can be added.

Sarah remembered another bracket (see right) that is hidden away in the V&A’s store at Blythe House, and not on the museum’s website.  The bracket is signed and dated ‘J.E. KNOX. 1911’, and also bears the inscription ‘LAMBETH’ in blue crayon.  The date, design and scale suggest that it may have been a pendant to the one in our 2014 catalogue.

Max has suggested, very plausibly, that the sculptor is James Erskine Knox (1841*-1917). Knox, the son of James Knox, a turner, was born in Lambeth.  He was apprenticed to Thomas Earp, a wood carver for whom he worked for some time.  Later in his career, Knox became an assistant to the architect John Francis Bentley (1839-1902) and worked for him at Westminster Cathedral.  Knox was a member of the Art Workers’ Guild and contributed to Arts & Crafts Exhibition Society exhibitions.

Further to the above, David Beevers has written to draw attention to St Martin’s Church, Lewes Road, Brighton (Somers Clarke Jr, 1872-75) which must have the greatest assemblage of Knox’s work in the country.  He carved parts of the massive reredos (1875) and, most notably, the extraordinary pulpit, 55′ high, inspired by the sacrament House in the church of St Sebald, Nuremberg.
7 July 2017

* Knox’s date of birth is traditionally given as circa 1842.  However, Nicholas Williams draws attention to Knox’s baptism record from the Parish of St John, Waterloo, which states his date of birth as 1 July 1841.
7 May 2019