Although the popular view prevails that English Arts & Crafts period design derives from the vernacular tradition, the story has, in fact, always been more nuanced.  Stephen Baker, in a perceptive article ‘Gimson’s Cotswold Furniture and its London Origins’ (Apollo, January 1979) discusses the influence of sophisticated metropolitan furniture on Gimson and his Cotswold contemporaries.  As an example, Baker cites a late seventeenth-century cabinet on stand (pl. 2) as a form that evidently influenced Ernest Gimson’s simplified cabinets of this type (pl. 1).

The recently discovered ‘writing desk’, designed by Gordon Russell (1892-1980), illustrated above, is a 1925 creation following the tradition discussed by Baker.

Like Gimson (1864-1919), Russell designed cabinets inspired by English seventeenth-century furniture, and also by the sixteenth- and seventeenth-century Spanish vargueno, comparable to work by Sidney Barnsley (1865-1926); see Baker, pls 5-6.  The design and contemporary photograph of a 1924 Russell  ‘Oak Fall Front Writing Cabinet’ in the form of a vargueno are preserved in the Gordon Russell archive; see Ray Leigh and Trevor Chinn, Drawn to Design, Broadway, 2013, p. 42 (design 172).  A second ‘vargueno‘, dated 1927, is in the collection of the Victoria and Albert Museum, London (CIRC.428:1-1965).

The present ‘Writing Desk’ is a somewhat simplified version of the 1924 ‘Walnut Inlaid Cabinet In Two Parts’ that won a Gold Medal at the 1925 Paris World’s Fair.  This earlier cabinet, design 157, is now in the collection of the Gordon Russell Design Museum, Broadway; see Leigh and Chinn, pp. 38-39. 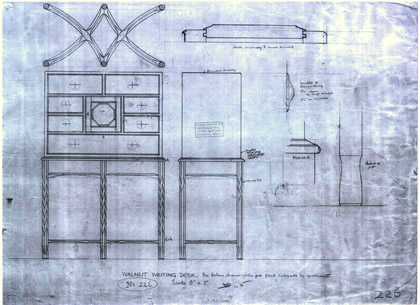 Although the cabinet under discussion here is called a ‘Walnut Writing Desk’ on design drawing 226 (left), both the subsequent design record book listing with the final price and the inscription on a contemporary photograph of the finished piece state: ‘Secretaire Cabinet in Cherry … handles of ebony and laburnum’.  Close scrutiny of the patterns in the wood revealed on this contemporary photograph (Leigh and Chinn, p. 46), show this to be one and the same cabinet, and it is indeed made of cherry.

All the drawers have ebony and laburnum handles, and the long draw beneath the central cupboard opens as a surface for writing (see below).  The measurements on the present ‘desk’, which in 1925 was priced £50, are identical to those given at the time: 3′ x 1′ 6″ x 4′ 6″ high (Gordon Russell design record book). 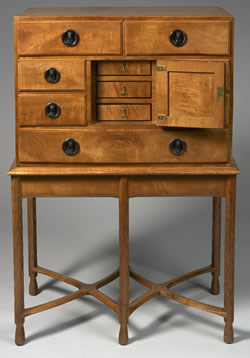 When this ‘writing desk’ appeared at James Thompson, Kirkby Lonsdale (3 July 2014, lot 815) the design was tentatively attributed to Russell or Gimson.  Subsequent enquiries established little about its provenance, other than that the vendor’s grandfather had been the piano buyer at Harrods, and that it may have been acquired through personal contacts at that department store.  The possibility of this memory being correct is not weakened by the fact that Sir Richard Woodman Burbridge (1872-1945), who was Chairman of Harrods at the time, commissioned furniture from Russell in 1927.

The newly discovered ‘writing desk’ has now been acquired from Blairman’s for an English private collection.