Sitting comfortably, on chairs designed by Thomas Chippendale the Younger

During a recent visit to Salisbury, I took some time to enjoy the magnificent cathedral.  Walking past the north transept, my eye was caught by a life-size seated figure.  On inspection this turned out to be a funerary monument to Richard Colt Hoare (1758-1838), the antiquarian owner of Stourhead, Wiltshire (above). 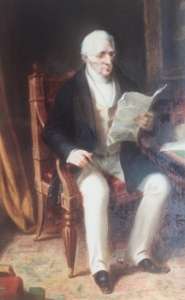 In 1800, Hoare added a Library and Picture Gallery at Stourhead, and between 1795 and 1820 ordered from Thomas Chippendale the Younger (1744-1822) what is now considered to be amongst the most refined Egyptian- and Grecian-inspired furniture designed during the Regency period.

The monument by Richard Cockle Lucas (1800-83), was made in 1841, three years after Hoare’s death. Best known for his works in wax and ivory, Lucas was a prolific sculptor, as is clear from his entry in Ingrid Roscoe’s revised A Biographical Dictionary of Sculptors in Britain 1660-1851, 2009, pp. 760-67. He was at the centre of an unresolved controversy about the bust of Flora in Berlin. The bust was thought to be an authentic work by Leonardo da Vinci but the sculptor’s son claimed that his father had been the author. The debated bust remains on display in the Bode Museum, but now tentatively described as English, nineteenth century.

Although this appears not to have been previously noted, the chair on which Hoare sits is clearly derived from one supplied by Chippendale (see below), albeit with Classical rather than Egyptian heads. In her recent survey ‘Thomas Chippendale the Younger at Stourhead’, Furniture History XLI (2005), Judith Goodison quotes the original account for ‘8 Mahogany Chairs with circular Backs broad sweep pannelld tops with Scrole elbows, carved Egyptian heads & fluted therm feet …’ (see below) supplied in 1805 at a cost £76 (p. 86, cat. no. 29).

Lucas was not the only artist to use a Chippendale chair to seat his subject. There is an 1846 oil painting at Apsley House by Thomas Jones Barker (1815-82) Wellington Reading the Indian Despatches (above). This painting clearly shows the 1st Duke of Wellington (1769-1852), the victor at Waterloo, seated in Chippendale the Younger’s armchair made from the ‘Waterloo Elm’. Geoffrey de Bellaigue published this chair, together with a more elaborate version from the Royal Collection in ‘The Waterloo Elm’, Furniture History XIV (1978), pp. 14-18.  Like the Stourhead chair used by Lucas, it appears that Barker’s use of the ‘Waterloo Elm’ chair has also been overlooked.