William Shakespeare: a table incorporating part of his mulberry tree

Shakespeare (1564-1616) is revered as the greatest figure in English literature.  Although long admired, it was not until the Great Shakespeare Jubilee arranged in 1769 by the actor David Garrick (1717-79) that the ‘Shakespeare industry’ really caught fire.

According to legend, not now disputed, in 1609 Shakespeare planted a mulberry tree in the garden of his home New Place, Stratford-upon-Avon. Even before the jubilee, this massive tree had become a focus of pilgrimage.  In 1756, the irritation caused to the then owner of the house, the Reverend Francis Gastrell, led him to have the tree felled. 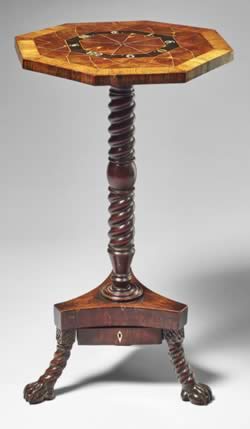 The timber was acquired by an enterprising local merchant named Thomas Sharp (born 1734). This carpenter, silversmith and clock maker subsequently made his fortune selling tea caddies (one of which belongs to the Victoria and Albert Museum), goblets, snuff boxes and so on from this prized timber.  Whole logs were also made available to selected cabinet-makers.

In 1762, Garrick purchased for 2 gns six large pieces of the timber and when his widow’s effects were sold in 1823, she still owned no less than five ‘Well-Authenticated Blocks from the Celebrated Tree of Shakespeare’.

Shown here is a ‘table’ made in 1824, that may well incorporate some of the wood once owned by Garrick.

The top is inlaid with the initials ‘WSMT [William Shakespeare’s Mulberry Tree?] and dated 1609, the year the tree was planted.  The underside is inscribed: ‘This Table made by B.R. and veneerd [sic] by him 1824 of the wood from the Mulberry Tree planted by Shakespeare and warranted to Dr. Hay Drummond as Genuine See the documents inclosed [now missing] in the drawer.’ Dr Drummond was presumably the antiquarian Edward Auriol Hay-Drummond (1758-1829).  It is safe to assume that either Hay-Drummond owned the precious ‘Shakespeare’ wood and commissioned the table, or that (perhaps less likely) the whole piece was commissioned for him as a gift.

The identity of the cabinet-maker ‘BR’ remains a mystery.  Only four cabinet-makers with those initials, and active at the right period, are recorded in the Dictionary of English Furniture Makers. The only one working in London was Benjamin Reeves of 1, Upsdell Row, Kingsland Road (recorded 1822-27).  There is, however, insufficient evidence to make an attribution to this maker.

This antiquarian table (now in an English private collection), is based on the form of a late seventeenth-century table or stand; it has mulberry veneer on its top and inside the drawer.