A weekend in Maastricht: preparing for TEFAF 2015 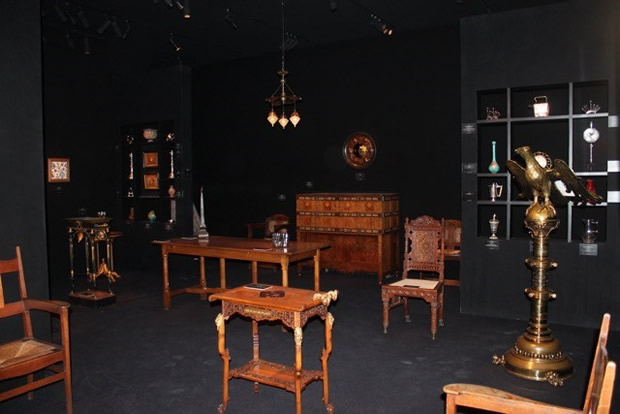 We left London in a somewhat relaxed mood, after breakfast at the incomparable Little Bread Pedlar, but then our Eurotunnel crossing was delayed.  Some two hours later than scheduled, however, we arrived in the MECC to find that the indefatigable Aston Spinks had unloaded their truck and intuitively placed perfectly all the larger furniture.  We hung an awkward Pugin clock and then called it a day.

The whole of Sunday was spent unpacking, placing (almost everything as planned from London), labelling, lighting and cleaning.  From organised chaos (see below), emerged a display that has a calm, which allows the individual objects the space they deserve to be best appreciated (see above).

Our exhibit includes many pieces of furniture and works of art that we have not previously shown.  Highlights include a shell dish designed in 1871 for himself by William Burges, a secretaire signed by Peter Waals, also shown here in his workshop, and a clock designed by Benson.

We look forward to welcoming you at strand 183, should you find yourself in Maastricht over between 13th and 22nd March.